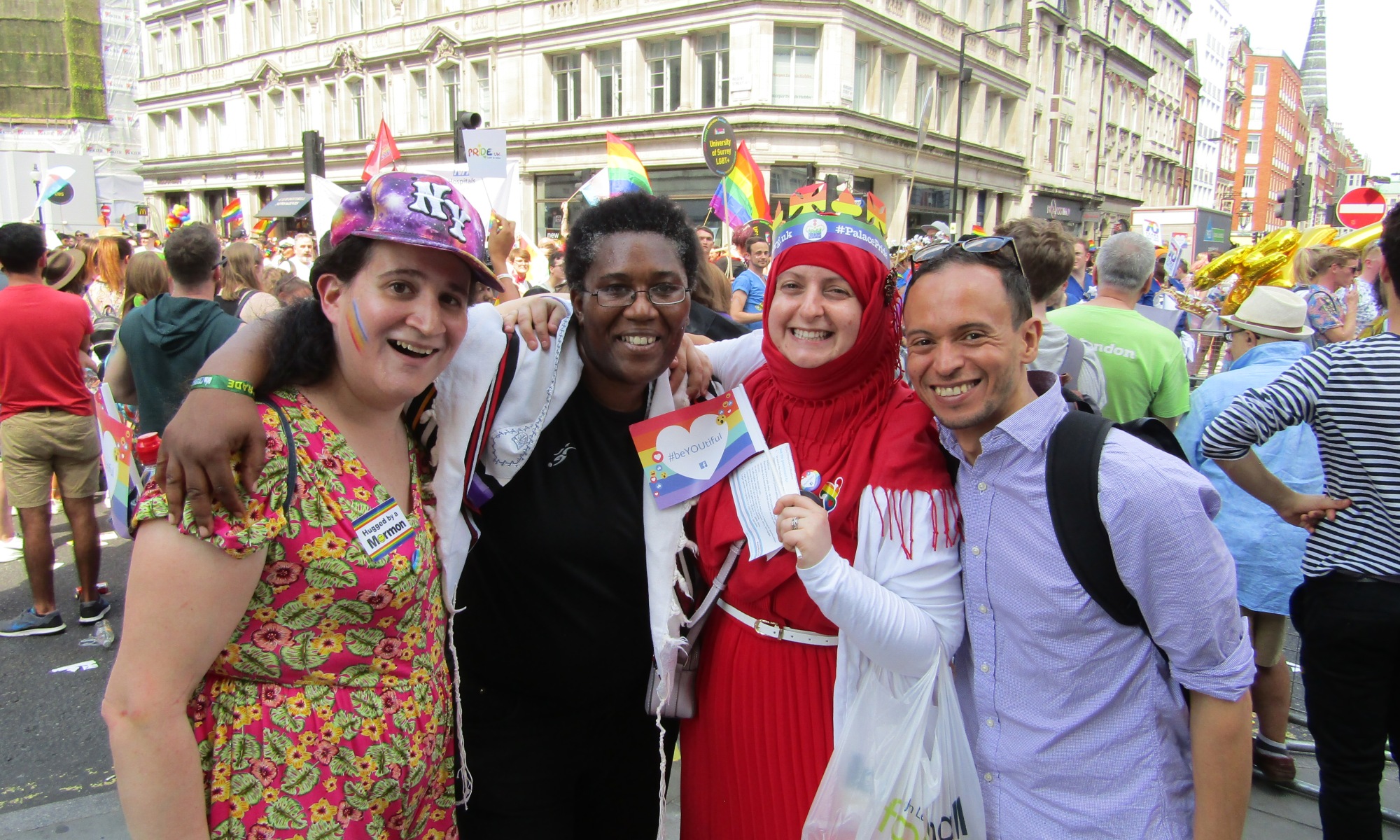 So July is Pride month and I took the plunge and went to my very first Pride parade. Now, depending on your background you might be thinking: “Why haven’t you been before, what’s the big deal?” Or you may instead be wondering: “Wow, Pride that’s a bit “out there” for a hijabi Muslimah – isn’t that haram”?

Well the first thing I’d like to say is that it was AMAZING and I do feel I’ve been missing out all of these years not having been part of the fun (much fun albeit there being a serious message behind it!). But alas – that will not be happening again! I’m already planning my outfit for next year!

This is where the blog post comes in – it wasn’t all smooth sailing. It was a journey of nerves, opposition, disappointment yet also pride, love, solidarity and unity. So, here’s my story. Whether you’re Muslim, non-Muslim, heterosexual, homosexual, cis or trans – I’m sure you’ll find it interesting! There’s things we can all learn and be proud – and not so proud of – to help us all move towards an inclusive, love (not hate) driven society. 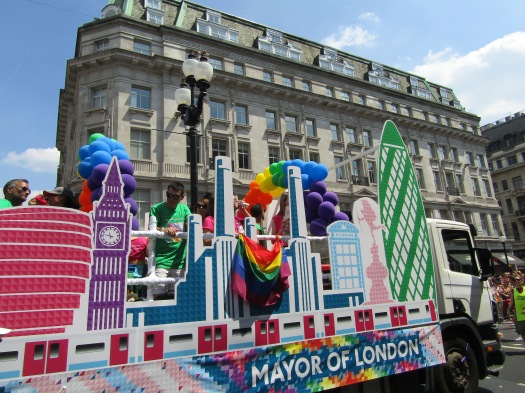 My Pride journey really started a few days before when I was on Twitter. I noticed that a group of ex-Muslims were calling for people to join them in solidarity at Pride. They were going to raise awareness against the criminalisation – death penalty to be precise – of members of the LGBTQI community in various Muslim countries.

Of course, I stood for their cause and when I reached out I found I was naturally welcomed with open arms. So that was it – I was down on the list to march with them the coming Saturday. However, things didn’t quite turn out as I hoped…

On the day of Pride itself I was excited as I’d managed to put together a fab outfit at the last minute and was looking forward to a day of positive action. However, as I was getting off the tube I must admit I did feel nervous. I was entering new territory. I was about to embark upon a new experience – one in fact that many Muslims would not be open to. But that shouldn’t deter us – and it certainly didn’t!

Standing in solidarity – but where? 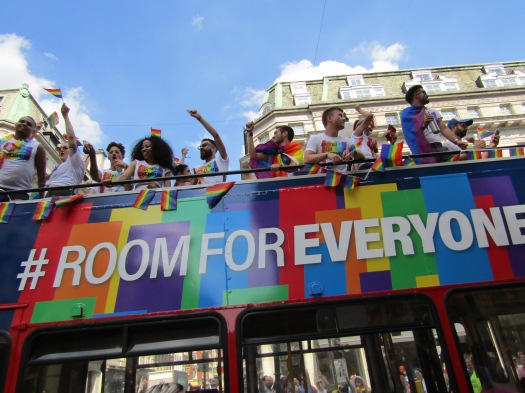 As I arrived at the meeting point, I saw a group in the corner that caught my eye who despite my shock, I unfortunately realised must be the people I was due to march with due to the pre-stipulated colour-based dress code. I knew however that that couldn’t happen…!

With “kafir” (which they would translate as “infidel” – but that’s another story) sprawled across their chests and signs cursing Prophet Muhammad (pbuh), I felt sad and disappointed with the behaviour of this group and confused at where this left me in relation to the march and myself as both a Muslim and LGBT ally. I knew that the wonderful Imaan was marching – who I sadly didn’t sign up with – but I was still left feeling rather deflated.

Of course, hatred, intolerance and “revenge” for the obvious politically-driven ills they’d faced were nothing to do with me and nothing to do with Pride. As a human rights activist – focused on Iran in particular – I of course understand the pain of someone growing up in Iran where daily life is dictated by a totalitarian regime based on an extreme dogmatic version of (what they conceive to be) “Islam”. But I’m not the Iranian government.

The religious theocracy of Iran (one of the countries of interest to the group) is not my Islam. It’s an offense to imply otherwise. At that point I felt offended and humiliated. I’m me. I’m Muslim and I’m proud to be Muslim. And I’m a Muslim that chose to come to Pride for the good, not to be ridiculed. When I agreed to join that group it was in (assumed) agreement of and respect to my faith. I am a Muslim. That is me. If I come to pride, I do so as Muslim (although there are obviously other elements that define me as well as my faith).

As a Muslim that is not part of the LGBTQI community, I wanted to stand with people of all faiths and none who identify as LGBTQI – and that includes Muslims. Insulting people with rhetoric and behaviour much like the EDL was an insult to me and to the brave LGBTQI Muslims who would be marching on that very same day. We must not forget that on the whole LGBTQI Muslims are often rejected by members of their own faith yet remain proud Muslims. Yes, there are Muslims out there – from both within and outside the LGBTQI community – that do stand with the LGBTQI community according to their own theological beliefs.

This unfortunate discourse and behaviour is incredibly damaging and counter-productive. As a first-time “Prid-er”, it made me question: “where do I belong here”? Pride is about celebration, unity, love and respect. Whilst of course the reasons behind it – homophobia, hate crime, discrimination – and all the ills that show exactly why we need Pride are a raw, real reality, that is not what I thought Pride is about.

The only way is forward

I was of course proven correct on that day as I saw the dancing, the smiles, the laughter, the respect, love and unity for everyone – with representatives of both the Jewish, Muslim, Christian and Sikh communities and secular-based organisations. Having decided to stay and instead watch the march, to observe and see what could come out of the day, I’m glad I did stay.

I got a great snapshot of what Pride is all about and was able to catch up a friend marching with Keshet – the only specifically Jewish LGBTQI organisation – and make some new ones whilst I was at it! We all felt the love that day so whilst it had its ups and downs – I’ll be back next year and the year after.

However, there are lessons that come from this which must be taken seriously. This is a critical point. We must stand with our brothers and sisters – of all faiths as well as those coming from a secular background. This is more important than ever if we wish to build an ever inclusive mainstream movement, tolerant of diverse sexualities.

And faith can and does play a part in this. Not everyone will agree on the role of faith but for those “marching for rights” you must accept the principles of religious tolerance and the room for LGBTQI within faith spaces. To do otherwise is some presumptuous, dictatorial and rather patronising.

So, If you don’t come with positivity (or non-discriminatory positive action such as the marchers against the violence in Chechnya), then please don’t come to Pride. Please take your agenda elsewhere. That goes for the people I met fighting Islamic extremism yet also demonising Muslims, as well as the anti-trans (non-heterosexual) protesters who hijacked part of the march.

The message is simple: No one can be proud of hatred, nor ignorance, nor division or humiliation. Pride is a celebration of all things positive: love, unity, tolerance, solidarity, friendship and so much more. And that’s how it will stay.

2 Replies to “Pride in the name of Allah: My 1st Pride march”