For those of you in the UK, you may remember hearing a few months back in the news about women being forced to wear high heels at work and one lady being told to go home for refusing to do so. Whilst we should all be smart (depending on your job!) and dressed respectably for work, wearing high heels does not equate professionalism.

Such outdated sexist attitudes towards women are unfortunately still alive. The reality is that women face sexual harassment at work, discrimination in being hired due to their right to maternity leave and earn less than men for the same job.

In some sectors such as high-end City business firms and politics, women find themselves in a male-dominated sphere. This is the 21st century people, yet this is the shocking reality women in Britain today face: 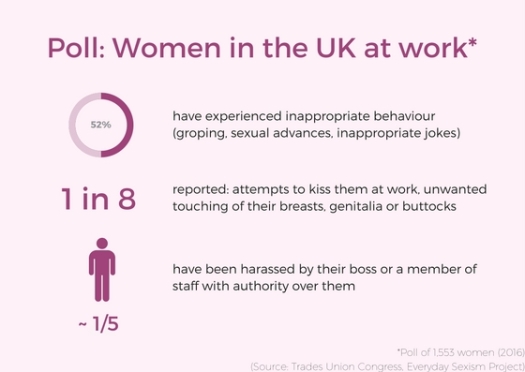 Shocking isn’t it?! More information on the statistics can be found here. However, I’d like to present some real-life testimony. Here’s the story of Steve*…

Steve* works for an international business solutions company based in London* and has found that his work environment is very patriarchal. The women in the office face daily regular sexual harassment and bullying. Here’s what the women in his office encounter:

When my female colleagues talk in the office, the men say: “Shhh! Shut up! You’re in a business office – don’t be loud!”. But they’re not loud at all. They are treated like second class citizens and sex objects.

On one particular occasion, after a work night out where my colleagues were drinking, one young male colleague named Ryan* got very drunk and couldn’t get home. My colleague Jane* offered for him to sleep on her sofa.

The next day at work, she was told that she had “raped him” and that everyone “should watch out for her”. For about two weeks after, whenever she walked into the office, everyone would start “egging” Ryan on saying: “Go on Ryan! Go on Ryan!” She clearly did not find this funny and was not comfortable at all but they carried on bullying her anyway.

Another male colleague called our colleague Caroline* “bitch” to her face as she wears mini-skirts to work. When Caroline walks into the office, my male colleagues make kissing noises.

On another occasion, another colleague Bradley* sat within a small group of male colleagues and compared the breasts of his wife (who works in the office) to those of Jenny*. On this occasion, no women were witness to the conversation.

Higher up the ladder, a senior figure in the company also informed the male member of the team that he “only hires beautiful birds” as he likes being in the company of “beautiful women”. One of the women he hired is from overseas and twenty years his junior and married with children. At work he intimidates her.

Beyond vocal comments and discussions, at Christmas, Gary* (a married man and father) came back to the office drunk and actually forced himself onto Patricia*, kissing her on the mouth. Patricia did not say anything. She appeared to find this normal but for me: this is not normal.

I feel sorry for all of the women who work with us. In a 20th century working environment, no woman should be treated like that.

I’m absolutely shocked by these so-called ‘English gentlemen’. The men I work with have showed their dark side and I have lost all respect towards them.

Sexism in the workplace is a big problem and many women are constantly bullied. The women in my office are trapped because they cannot afford to lose their jobs.

Action must be taken against these – to be blunt – chavs.

*Names and location have been changed to protect identity. Testimony co-written/edited by Voice of Salam (narrated). Please note: I have presented the testimony of a male witness due to availability of witness testimony. If any women would like to share their stories, please get in touch!

So, ladies (and men – in reality anyone affected by discrimination in the workplace of any kind): please call out and report such behaviour!

For information and advice in relation to the UK please visit/speak to:

For those of you outside the UK – please seek help. Don’t put up with it! Call it out and get the emotional and legal support you need, deserve and are entitled to.

Thanks go to “Steve” for his time and assistance in providing his testimony. Best wishes go the ladies affected by the issues discussed.