International Women’s Day is 8th March. This day represents a time to come together to celebrate the achievements of women worldwide but to also remind ourselves of the fact that that there is much more that needs to be done to protect, enforce and encourage women’s rights locally, nationally and internationally.

One particular issue which affects millions of women and girls worldwide is Female Genital Mutilation (FGM). According to UNICEF (2016), more than 200 million women and girls in the world today have been cut across Africa, the Middle East on Asia. This is a serious issue with devastating permanent consequences.

In a previous blog I outlined the risks associated with and the myths behind FGM. Here, I want to highlight how men must engage in the fight against FGM. FGM stems from sexist, patriarchal norms around modesty, sexuality and social freedom. To end this struggle, boys and men have to engage in the struggle and say enough is enough.

With this is mind, I’d like to introduce Tony Mwebia an online and off-line advocate primarily focussed on ending Female Genital Mutilation (FGM) and other harmful cultural practices. In his online campaigns he mainly focuses on rallying policy makers, NGOs and government agencies to engage more men in the fight against FGM as he strongly believes engaging males will help catalyse this fight. Offline he engages men and boys through dialogues and discussions aimed at changing their perceptions and attitudes towards this harmful cultural practice. Here’s his story.

Discovering FGM: Where it all started

You may be shocked to know back in 2012 I had no idea about FGM. It was all by coincidence, while volunteering with an organisation dealing with urban refugees in Nairobi, that I was given a chance to work as a project assistant on an FGM project. My turning point was when one Somalian refugee narrated how he lost his wife and baby due to complications related to FGM.

I then realised that men also had many stories about FGM but they rarely shared them. Men were living with spouses who had suffered fistula, whilst the economic burden that comes with frequent hospital visits due to complications was also heavy. I was shocked to learn how men could not enjoy sex with their loved ones and that they instead opted to look for women from other tribes who had not undergone FGM. This then became the start of my #MenENDFGM online campaign.

FGM in Kenya: The figures speak the real truth

In Kenya FGM is illegal under the Prohibition of Female Genital Mutilation Act (October 2011) which sets out several offences and punishments for offenders. The national prevalence of FGM according to the Kenya Demographic and Health Survey (KDHS) (2014) stands at 21%. Despite this figure though, the reality on the ground is entirely different. The rate of FGM can be as high as:

This a clearly indication that FGM is still a major issue of concern and is affecting thousands of girls – especially in rural Kenya.

Many communities in Kenya, as in most African societies, are patriarchal in nature. Men yield immense power over numerous aspects of women’s lives as husbands, politicians, religious leaders and key policy/decision makers.

In rural settings where FGM is mostly carried out, men have no idea of what happens during “the cut”. They are not allowed to attend the ceremony which is kept solely for women. This creates a big gap in the fight against FGM as most men are made to believe FGM is just a rite of passage meant to beautify and prepare girls for marriage. This calls for massive sensitisation and engagement of boys and men in dialogues to clearly enlighten them and bring them to speed with the actual repercussions of FGM.

Bringing an end to “the cut”: Where do we go from here?

Informed men can easily influence policies and decisions right from the family level up to national and international levels on issues such as FGM. If all men said no to FGM today, then our work would be decrease greatly as this practice would reduce to insignificant levels all over the communities where it is currently practiced.

Remember: most – if not all – of the reasons behind FGM point directly or indirectly to increasing marriageability of local girls. So who are the potential husbands? What if they said they will not marry girls who’ve been “cut”? In doing this though we need to be careful not to discriminate against women and girls who have already been cut as most of them are either forced or coerced to undergo FGM.

In conclusion let me say that the estimated 200 million women and girls alive today who have undergone FGM are not just a number. This figure represents the millions of women and girls who were born perfect but have instead been subjected to a lifetime of suffering due to having been forced to undergo this prolific harmful cultural practice.

This number is also a rallying call to humanity to join hands in ensuring that no other girl becomes an FGM statistic. Remember: no single individual, gender, community, organization, country, region or religion can end FGM alone. 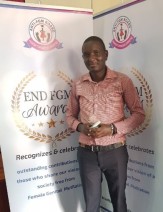 Tony Mwebia #MenENDFGM is an award winning online and offline activist fighting against FGM and other harmful cultural practices. He is also an active as sexual and reproductive health and rights (SRHR) advocate.

Thank you Tony for your sharing your inspiration and great work with us. All the best with your campaign in the future!