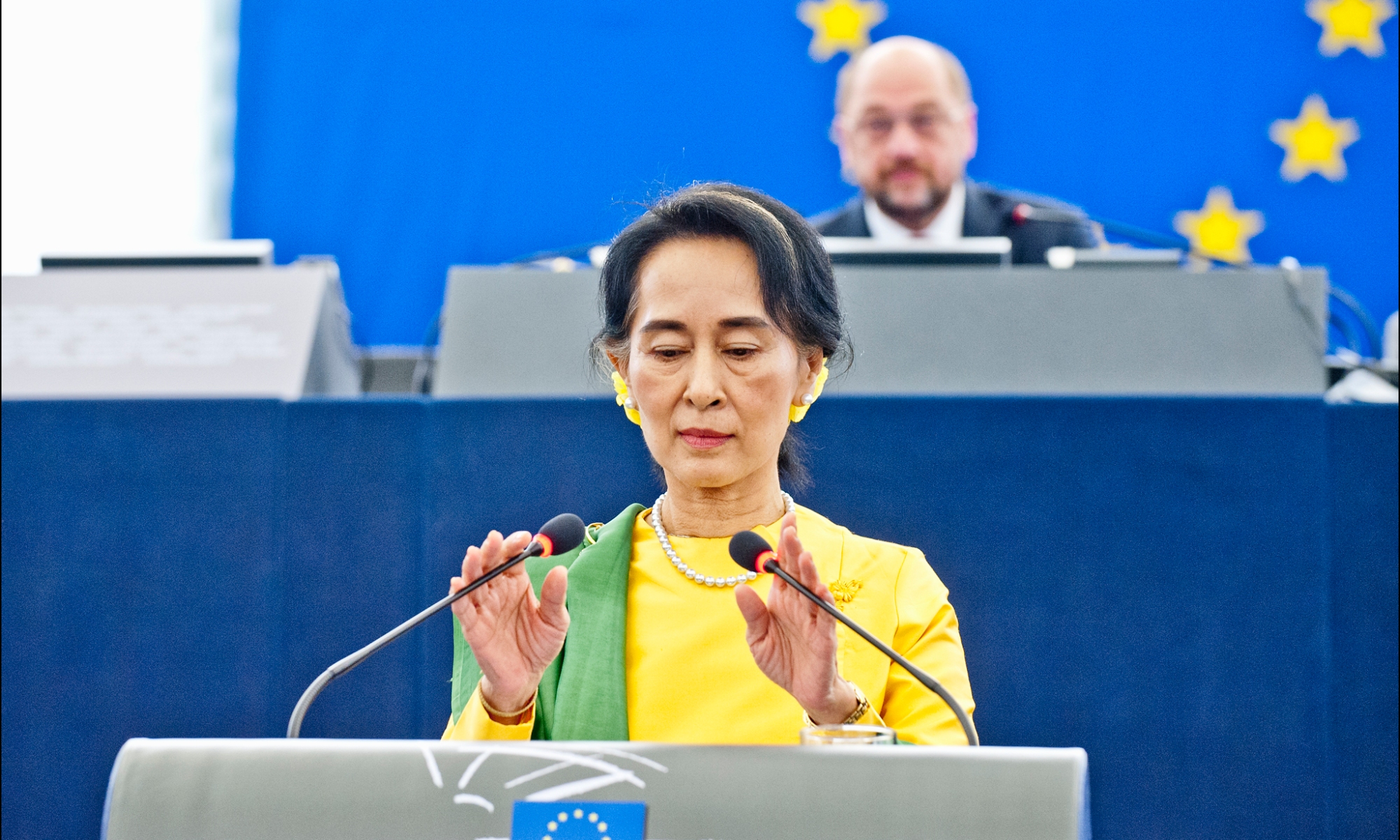 You once famously said: “The true measure of justice of a system is the amount of protection it guarantees to the weakest“. Wise words indeed. Society has a responsibility to not only provide for its citizens but address social, economical and political inequality. So, bearing that in mind, I’d like to know why the Rohingya people are not included in your political system and sphere of beliefs – in the values of democracy you stand for and which you fought for so long to hope to make a reality in Myanmar.

Of course, one of the few things you are rumoured to have said is for foreign governments to stop referring to this group of people as “Rohingya”. Yet I’m afraid the issue is more serious than simple semantics… As you are more than aware, the Rohingya face social, economical, religious and political discrimination. They are not only denied citizenship – despite their long history and residence in Myanmar – but are subject to repeated racist/Islamophobic attacks by your own citizens including extremist “Buddhists” and worse of all subject to rape, torture and murder at the hands of your father’s military – an army you are apparently quite “fond” of.

The Rohingya have been referred to as “the world’s most persecuted refugees in the world” – a people subjected to genocide whom nobody seems willing to help. I’m quoting here the renowned international human rights organisation Amnesty International – an NGO which fought for your freedom and upholds the values you claim to believe in and stand for. Here you feature on their website in an article entitled: “15 inspiring human rights quotes” with the following words of peace:

Peace does not just mean putting an end to violence or war, but to all other factors that threaten peace, such as discrimination, such as inequality, poverty.

You’re a renounced figure of justice, peace and democracy worldwide. You’ve received many honours including the Nobel Peace Prize, Sakharov Prize, Rafto Prize, Jawaharlal Nehru Award, Order of Australia, US Congressional Gold Medal and the Presidential Medal of Freedom. You were also an honorary member of Nelson Mandela’s Elders. But now I ask you, what was this for? For what purpose? How can you sit back and remain silent when an entire group of people are being massacred?

I hate to cry “racism”or “Islamophobia” but what else is there? You’ve been challenged about this before and the result was a combination of rather astonishing angry backlash or vague excuses and often utter silence. One shocking incident was when you made an off-air comment about BBC Today presenter Mishal Husain following your interview together in which she asked you to condemn anti-Islamic sentiment. You apparently lost your temper, later stating: “No one told me I was going to be interviewed by a Muslim”. What a sad precedent this set…The Dalai Lama, the holy figure of Buddhism (a peaceful faith which you claim to belong to and shape your life by) has also called on you to address the issue – yet nothing…. You instead blame the reality of violence and “a climate of fear” on both sides (Muslims/Buddhists) with which you apparently “do not want to take sides“,  in addition to the fact that Myanmar is a slow growing democracy. However, the fact remains that the Rohingya community are overwhelmingly affected and this is your responsibility.

Firstly, it is up to you as a leader and politician to help build social harmony amongst groups and to condemn Islamophobic hate speech and hate crime in Myanmar. Extremist “Buddhist monks” are no better than ISIS/extremist jihadi preachers. Extremism is a human disease. It belongs to no religion. Any violence committed by any group is an atrocity. Yet sadly, secondly: we have moved beyond the shunning of Rohingya businesses and the lack of citizenship for this poor stateless group but to rape, torture, murder…and ultimately to genocide. Now is not the time to stay silent. It’s too late. You are already implicit.

Implicit is a strong word but at this stage you have blood on your hands. How can anyone, least of all yourself stand by and fail to even simply condemn such actions?! Do you not value these people or are you simply struck by fear? Fear has never held you back before. In your own book Freedom from Fear, you said:

Within a system which denies the existence of basic human rights, fear tends to be the order of the day. Fear of imprisonment, fear of torture, fear of death, fear of losing friends, family, property or means of livelihood, fear of poverty, fear of isolation, fear of failure. A most insidious form of fear is that which masquerades as common sense or even wisdom, condemning as foolish, reckless, insignificant or futile the small, daily acts of courage which help to preserve man’s self-respect and inherent human dignity. It is not easy for a people conditioned by fear under the iron rule of the principle that might is right to free themselves from the enervating miasma of fear. Yet even under the most crushing state machinery courage rises up again and again, for fear is not the natural state of civilized man.

Years of activism in the name of democracy and 15 years of house arrest…for what I ask? One Noble Peace Prize… for what outcome, for what legacy? Regardless of faith, ethnicity, skin colour, whatever it may be – we are all human. The Rohingya people – of YOUR country – deserve equality, freedom, democracy. They deserve life, family, religious freedom, freedom from sexual violence, freedom from poverty and economic and social discrimination. They deserve life, their dignity and above all they deserve you to remain true to your word and walk back from the path of silent hypocrisy you currently stand upon. They deserve you to recognise them as their social, religious, cultural and ethnic equal. They are your brothers and sisters who want to live a life a peace – a word you claim to stand for but of which no trace remains. Instead of peace lie the cries of the raped, the tortured and the grieving widows and family of those massacred at the hand of your government’s army.

It’s all over the media: how can a Noble Peace Prize winner stay silent? Your initial lack of action allowed such hatred to grow and your current silence implicates you as you fail to stop military violence. Protests are now taking place. So, I ask you: when you look in the mirror, when you lie in bed, when you wake up and when you pray – do you think of them…?

Your sister in humanity,