On Saturday 27th April 2019, the festival of Pesach (Passover) came to an end for Jews worldwide. Whilst this day should have been marked with celebration and joy, it will tragically now be known for the exact opposite. As we have all recently heard in the news, whilst the local congregation at Chabad of Poway Synagogue near San Diego were marking the end of Passover, Lori Gilbert-Kaye – a 60-year-old much-loved member of the Jewish community – was murdered in cold blood.

Risking her life to save Rabbi Yisroel Goldstein, who was evacuating children from the synagogue after gunfire broke out, she shielded others from the bullets and never left the synagogue alive. In her final moments, Lori showed herself to be an Eshet Chayil – a woman of valour. Now, merely days later, such tragic events serve as a terrible reminder that although Jews are now free, they are still being murdered – simply for being Jewish.

If through living my Jewish life through my understanding of Passover I can have a tenth of the bravery Lori had, I will be doing well. Passover is already a period of great reflection for Jews worldwide, however with the recent attacks, we’re reflecting even more on the past as a global Jewish community. Passover and the lessons it teaches however go far beyond the Jewish community. In this blog, we’ll see how Pesach’s raison d’être can be translated into a wider message for all of humanity. Here’s my five key Passover lessons and why they’re each so important.

1. Freedom is every person’s fundamental right

When we sit down with our friends and family for the Seder (Passover meal), we speak of fleeing from the Egyptian house of bondage, where Jews were held as slaves for many years. We celebrate how, despite all the persecution Jews have faced since they fled Egypt, we are now free. This message is embodied in the following Haggadah (the book that sets out the order of the Passover Seder):

Let all who are hungry come and eat; let all who are in need share our Pesach. Now we are oppressed. Next year may we be free people.

During Passover, we are reminded that freedom is a fundamental human right for every single one of us, regardless of our background or place of birth. Nevertheless, as we speak, many people are instead living slavery or subjected to false imprisonment, such as Nazanin Zaghari-Ratcliffe, a British mother who has been unfairly imprisoned in Iran since April 2016. Furthermore, one million Uyghur Muslims are also currently detained in concentration camps in the region of Xinjiang (China) as part of a State-led “re-education programme”. These people are denied their freedom, whilst Lori Gilbert-Kaye also sacrificed her own life to save the life of her own Rabbi and dear friend.

2. Sharing stories helps us to remember and reflect

As a British Jew living in this ever-changing world, Passover provides time to reflect on my faith and history according to Jewish tradition:

In every generation a person has an obligation to view him or herself as if he or she were the one who went out of Egypt. (Haggadah)

When you read and sing the Passover story, as generations of Jews have done since their liberation from slavery, you are meant to imagine yourself living in Egypt in slavery and being subsequently freed. This helps us to remember how fortunate we are and that, even in the darkest of times, there is a light of hope flickering in the distance – no matter how invisible it may sometimes seem.

Such storytelling encourages me to share and investigate my most personal of thoughts. I truly believe if the rest of humanity were to do this, our souls would be enriched. By remembering and sharing with others, we can build crucial bridges through seeing the humanity in others. Following the San Diego massacre, we must especially keep the stories of heroism within communities alive, including that of Lori Gilbert-Kaye. In Judaism, when someone dies, we say: “May their memory be a blessing”. May the story of Lori’s bravery therefore serve as a long-lasting blessing to all those fortunate enough to hear her story.

3. We must listen to others different from ourselves

Something which I’ve been reflecting on since Passover is how quickly I rush to judge others. I sadly have a tendency to always think that I’m right, that my view is correct and that there’s no room for another view for reflection, humility or doubt. Rather than listening, I instead react first.

However, I don’t think I’m the only one guilty of this! Stubbornness and indifference are sadly incredibly common in today’s world. We often refuse to be friends with those who hold differing views, instead preferring to hide in our ready-made echo chambers where we only hear the views of those agreeing with us. This only serves to feed our egos and convince us that we are correct and that anyone else is wrong, or even worse: immoral. In the Passover Haggadah, we’re instead taught that we must be humble enough to realise we don’t have all the answers and to instead listen to others:

The oppression of Pharaoh is not just making you do things you don’t want to do; in the inner life tradition, Pharaoh is also the voice that convinces you that everything you think is correct. The spiritual Pharaoh erases doubt and humility. (Rabbi Mordecai Finley)

I’m therefore going to try to judge less (quickly) and listen more, for we all have the ability to make the world a less judgemental, healthier place to live in!

4. Embracing the unknown is a blessing!

Jumping into the unknown can be terrifying but it’s also incredibly enriching! Until recently for example, I knew little about Islam. I was scared to learn about it, partly as I was scared that I’d become distant from my Jewish faith. However, strangely, the exact opposite has happened! I am now re-embracing Judaism, having learnt how closely entwined Judaism and Islam are, and I am also speaking out against Islamophobia.

The Passover story does not end at Mount Sinai or the Promised Land, but after having crossed the Red Sea. Here, crossing the Red Sea meant stepping into a nerve-jangling unknown, surrounded by enemies seeking to re-enslave us, whilst we also risked drowning in the sea. All we had as Jews was ourselves and our faith, yet with a little bit of faith, we miraculously survived.

Passover therefore teaches me to take steps to live in a better world, even if at times I may feel overwhelmed. Following the attack on Chabad of Poway near San Diego, some people may feel that overcoming Islamophobia, antisemitism, homophobia, misogyny and many other forms of prejudice is too difficult. However, if we believe in each and everyone’s capacity to make a difference, we can create critical change. If we do so, we will also no longer need to mourn the loss of beautiful people such as Lori Gilbert-Kaye.

5. Speaking out against injustice is our responsibility 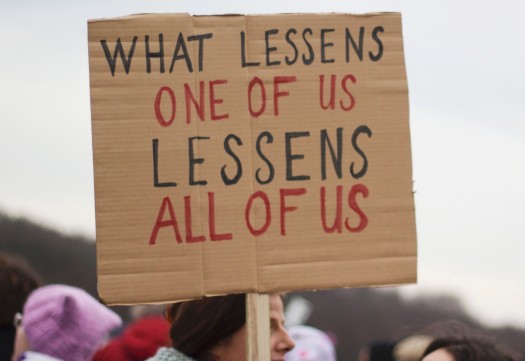 A key actor in the story of Passover is the silent child who does not know how to tell the story of the Jews miraculous liberation from the bondage of Egypt. This child is not mean or incapable of speaking out though. He/she merely represents the majority of us going about our daily lives, trying to live as moral a life as possible, but turning a blind eye to the suffering of others out of a lack of knowledge or fear of speaking out.

As generations of individuals have adopted this understandable attitude, lies, prejudice and conspiracies have subsequently filled the void. We can overcome this by speaking out a little more loudly against prejudice. In doing so, we can help fill the void of silence which ignorance and prejudice fill. Take the presenter Rachel Riley as an example. After experiencing antisemitism, she’s been since calling on the British public to speak out against antisemitism and #BeLouder – and it’s made a crucial difference. We too should all seek to raise our voices and  #BeLouder whenever we see prejudice in any form whatsoever.

Passover may be a Jewish festival but these five lessons are something we can all learn from. We can make a positive impact on our lives and the world around us. So, stand up and speak out!

This article is dedicated to the late Lori Gilbert-Kaye. May Lori’s memory be a blessing and light of love and hope to us all. Rest in peace. ♥

The opinions and views expressed in this blog do not necessarily represent the views of Voice of Salam and its members.