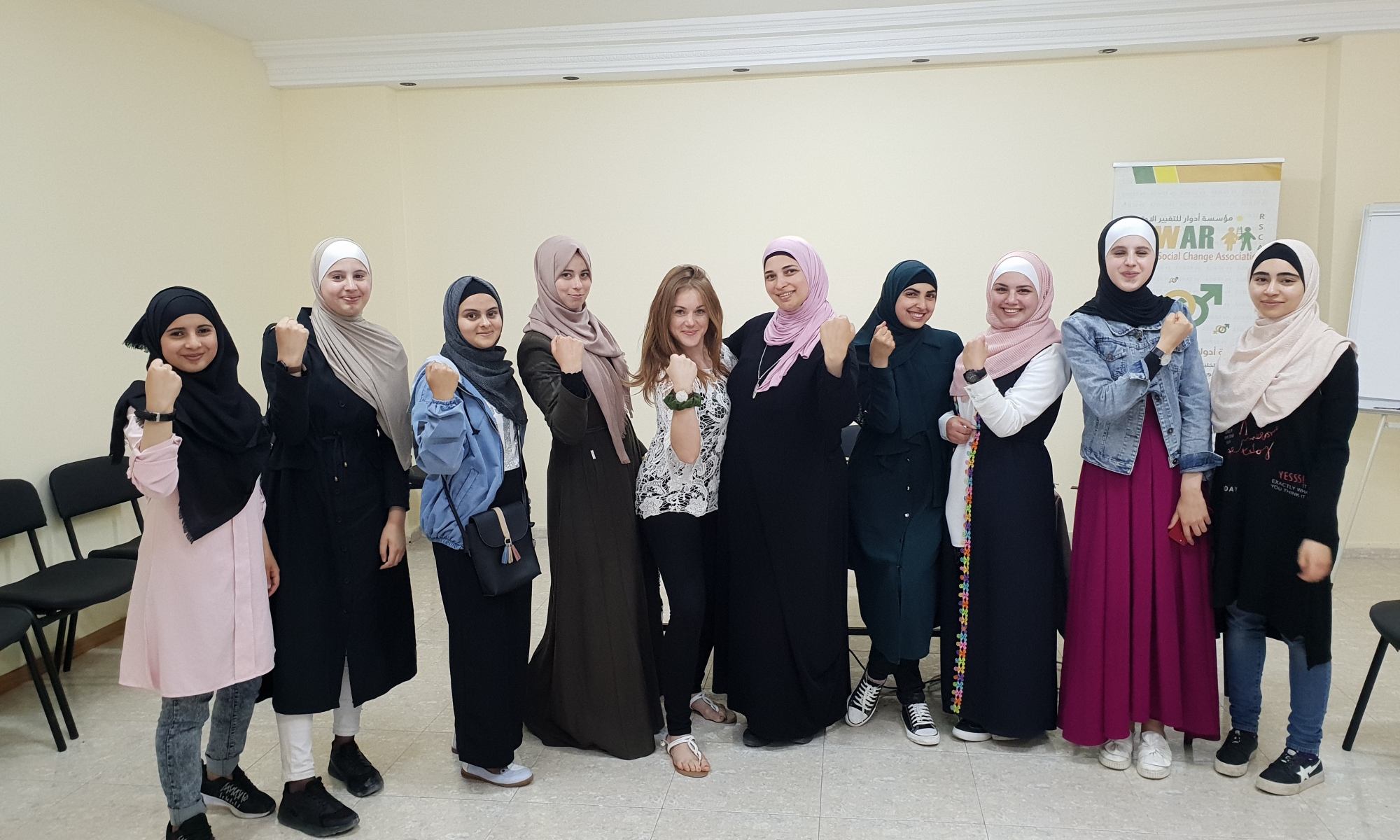 Hebron, located in the south of the West Bank, is a city split into three areas: A, B and C. There are three ruling forces with three separate legal systems. Area A is controlled by the Palestinian Authority, Area B is under joint PA-Israeli control (which effectively means little control) and Area C is under Israeli control. It is no wonder then that Hebron is a town divided, plagued with conflict and increasingly influenced by religious extremism; from both Islamist and Jewish groups. With such instability, we see poor social infrastructure, ineffective governance and therefore ultimately suffering communities. In this context, it’s women especially who are seeing an increase in the erosion of their rights. One of the biggest threats to their wellbeing being domestic violence.

A 2016 study into security in Hebron* found that 38% of Palestinians living outside area A would rather “”take matters into their own hands” than go to the police. That means that in these areas, problems are being “resolved” by Islamist extremists, in particular, affiliates of Hizb ut-Tahrir (HuT) – the pernicious politically-driven religious group which uses extreme interpretations of religion to dictate how people should behave – including Muslim women.

As an extremist group with a particular ideology, HuT tries to control how “Islam” is defined and practised, and through that, the group controls the community under the guise of religious rules. In recent years, it has become more coordinated and active and has now established a community-monitoring group called “Rijal al Khaleel” (“Men of Hebron”). In August 2018, this group was responsible for disrupting a mixed-gender marathon running through Hebron. Merely a few months later on the 18th October 2018, they also disrupted a music festival for children as they interpret Islam to forbid listening to music.

Speaking to me about the rise of the group, Rateeba Alaedin, Director of Sharek Youth,  explained clearly about the danger of political Islam in the area:

We used to live together with different interpretations of Islam with no conflict between us based on our religion. We used to identify with our nation, language and culture – but now political Islam tries to dominate identity.

Rateeba’s life has been threatened for promoting women’s rights and she has even been labelled a “Western spy working to destroy Islam” for her work. However, she stands firm:

It is here that we will focus: women’s rights and the fight for women’s freedom, autonomy and social, economic, emotional and physical wellbeing. 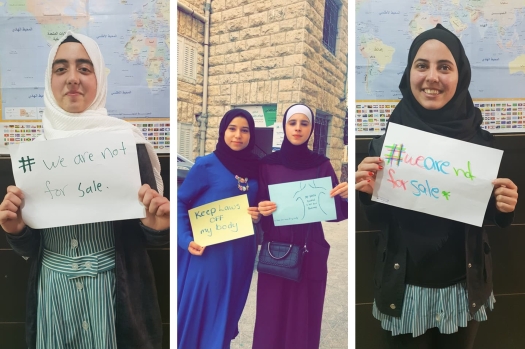 Before we launched our project, a number of women who lead women’s organisations in Hebron had reported to me that their families had received violent threats due to their work focused on women’s rights and empowering women in the region. The idea that women are the caretakers of “family honour” and therefore that their behaviour dictates the status of the family is very much a firmly held belief in Palestine, increasingly enforced by HuT affiliated groups. Sadly, this can and does bring fatal consequences. According to UNHRC, between 2010 and 2015, 50 women were killed by domestic violence, in the name of so-called “family honour”.**

Moreover, despite Palestine being a signatory to the Convention on the Elimination of All Forms of Discrimination Against Women (CEDAW), a staggering 29.9% of ever-married women in the West Bank have faced domestic violence within their own household – a figure which increases to 51% in Gaza. Of the women who have come forward as victims of violence in the West Bank, only 0.7% sought the assistance of an institution. Through delivering workshops to women in remote areas surrounding Hebron, we discovered that a major factor in these women not seeking support is a complete lack of awareness that the police and specific third sector organisations are there to help them.

This is why Become The Voice is determined to return this November to equip a new youth group to deliver domestic violence awareness workshops to engage with a much larger number of women. The impact of our work so far in Hebron has shown just how critical awareness raising and training really is. We asked the women who attended domestic violence awareness training what they found most interesting from our workshop and the results were incredibly positive:

We are talking about something that is taboo and cannot be talked about in this society.

I have learnt new terms and definitions – equality, equity, justice; what they mean and what the differences are between them.

Day one of #BTVPalestine‘s #DomesticViolence training – before a bespoke campaign is created by our participants. Follow the hashtag #BTVPalestine for updates and behind-the-scenes snaps ♀️💪😀 pic.twitter.com/MzRUa7d8xc

However, this is only the beginning. Young people in Hebron are inspirational in their determination to stand for human rights more generally and against the rise of Islamism. Last February three young Palestinians set up a counter movement to extremism called the “Freedom Runners“, which ran the streets of Hebron to encourage people to participate in sporting activities together – regardless of gender. Initially, they were laughed and sneered at, but after six months the group grew to 25 members which was a great change!

In March 2019, the Freedom Runners later organised a public run in support of cancer research. Of the 250 people invited, 70 attended – with both genders participating. Sadly however, Hizb ut-Tahrir sent a report to the Minister of Education condemning the mixing of genders in sport. Merely a few months later in August of the same year, a marathon organised by Planned Family Planning and Protection Association and attended by the Freedom Runners was also disrupted.

Mazen Alzaro, a Palestinian Imam and Director of Become The Voice is determined to challenge HuT’s grip on the community:

I want to work with youth in Hebron to build a counter movement to Hizb ut-Tahrir: A coordinated, well informed group of activists intent on pushing for progress and [standing] firm on equal rights. I hope to find the funding to run a 12-week programme, in collaboration with Become The Voice in 2020.

For all of this to be possible we need your support. Whether it be through volunteering your expertise, donating or helping us fundraise or simply raising awareness – every bit of help you can offer can make a world of difference. If you’d like to help support our follow-up project, please donate here. Thank you!

Women in Hebron deserve better than to be the “beacons of family honour”. As a woman myself, it saddens me that such a large percentage of our sisters are facing such abuse and feel unable to seek help. We need to stand with our sisters and communities across Hebron to say no to gender-based violence and no to Islamism. Education, awareness training, training and advocacy are a critical step forward, to equip and empower women and men alike to stand up against hatred and extremism and build a safer community for everyone.

To find out more about Become The Voice’s work with women in Hebron, you can download their 2018 project report here and read the latest news and participant feedback via their website.

Charlotte Littlewood is a counter-extremism expert. Having worked in Prevent, on the Counter Extremism strategy, she is also the Founding Director of Become The Voice CIC (BTV) and is currently about to start her PhD at the University of Exeter whilst continuing to deliver BTV programmes in the UK and Palestine.

BTV is committed to helping and supporting young people to become the voice – to effect change that not only positively impacts their communities but also builds their resilience to conspiratorial thinking, hate narratives, extremism and radicalisation.

**Ministry of Women’s Affairs and Chemonics (2016) “Comprehensive Analysis for Gender Based Violence and the Status of the National Referral System in the West Bank”, August 2016, p.21

One Reply to “On the ground in Hebron: Empowering Palestinian women against domestic violence”