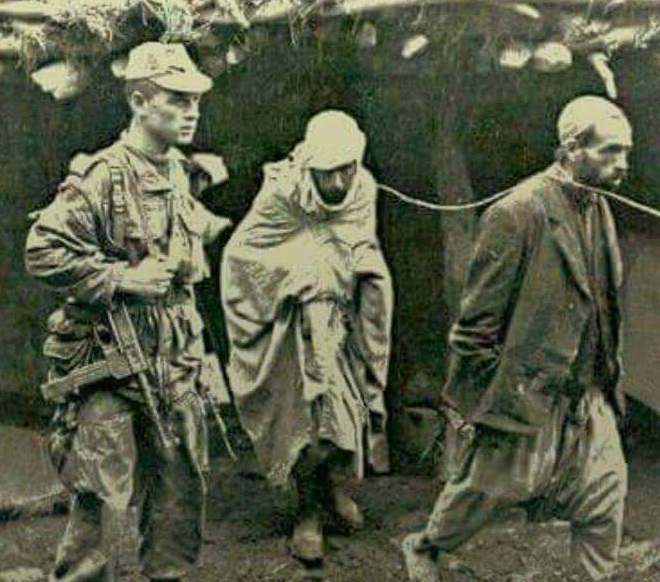 WARNING: Contains graphic images which you may find distressing.

I myself wasn’t yet born but to put things into perspective, here are some key events of the decade prior to 1962 itself :

WWII had ended 17 years before. There are in fact many major events in the 1960s but I’d like to point to one in particular: more than half way through the 21st century – on 5th July 1962 to be precise – a nation became free from colonial rule by a wealthy European nation, a nation state which belongs to the EU, NATO and WTO.

During this bloody war which lasted almost eight years, starting 1st November 1954 following the colonial invasion of Algeria in 1830, Algerian men, women and children were subject to humiliation, rape and torture on top of being denied their sovereignty and freedom.

French General Paul Aussaresses detailed his use of torture with no shred of mercy or regret:

Aussaresses explained that in 1957, torture and murder were an integral part of France’s war policy. He boasted that methods were employed that were not covered by the conventions of war, that he had given his subordinates orders to kill and had personally liquidated 24 FLN members, telling Le Monde, “I do not regret it.”

The use of torture by any group whatsoever is unacceptable. What makes this story ever more shocking is that, not content with the torture and mutilation of Algerians with no right to their land, which was at the time then officially part of the French Republic (yet denying Algerians French citizenship), France has yet to even acknowledge the horror of what happened or to apologise. France is in denial.

The Algerian people have suffered in a short space of time from the combination of colonialism, the war for independence and civil war against Islamic extremism in the 1990s. Sadly, the memory of the war is far from buried. And with that in mind, I present an interview account of life during the colonial era, the war itself and the effects of these events on modern day Algeria.

This is a real first hand account of a tragic, bloody era from an Algerian national who grew up in Eastern Algeria, where it all began.

What is your earliest memory of the war? How old were you when Algeria gained independence?

In all honesty […], I don’t have strong memories and lot of details about the war because I was only two/three years old at the time but I do still remember the immense poverty and ignorance with which the Algerian people lived through because of the French […].

My town was affected by this misery like any other small village in Algeria. We didn’t have heating or lighting (electricity) and there were no schools where we could get an education. Those that did exist were very traditional and purely Islamic.

Why did France colonise Algeria and why was the fight for independence so long and brutal?

In my opinion, there are various reasons and motives behind the French colonisation. The first one is: imperial and colonial expansion. Secondly: exploiting Algeria’s resources, for example our agricultural riches, mines, oil, energy and coastlines. The other reason was to spread Christianity in a new Crusade to fight Islam and as proof, they destroyed a lot of mosques and converted them into churches […].

They wanted Algeria to be a territorial extension of France – they wanted it to be theirs. The fight for independence was long and brutal because on top of French logistical and technological advancement, in terms of heavy weaponry and sophisticated bombs, they also worked systematically on eradicating Algerian identity and making the whole nation forget who they were by manipulating people and telling them there was no such thing as Algeria or Algerian history.

What was life like on a daily basis under French rule and later during the war?

Life was very tough in all aspects including socially and economically. Algerians were discriminated against and were not able to have a good life. Algerians were seen as even lower than second class citizens.

How did Algerians feel about the colonial period and the war?

Even before the revolution, they were at breaking point and were waiting for a leader to lead the way to freedom.

What role did your friends and family play? Your father fought in the war and your mother assisted – could you tell us about this?

The French colonial system burnt my parents’ and uncles’ houses because they were suspected of being involved in the war of independence. They killed our animals, they shot the sheep, dogs, cows and they kicked my family out into a mountainous area where conditions were very tough.

However, my parents didn’t give up and they decided to carry on their fight against France. They instead built a basement in their home to act as a centre of refuge for those involved in the war. It was a shelter for the resistance. They slowly brought medics in to take care of the injured.

Mum used to cook for them and look after them. She also used to sew their clothes […] when someone was killed […] in their eyes they were martyrs […] because they died […] defending their land against one of the most ferocious colonisers (of the 19th/20th century).

Did you know any “pieds noirs” (French settlers in Algeria)? What was your relationship with them like?

The pieds noirs were the richest people in society. They seized all the land and enslaved people in their farms. I knew a rich pieds noire bourgeoisie family. They were unapproachable.

Were the “pieds noirs” Algerian or French? How did native Algerians view them? Why did they leave? Would they be welcome back?

They were civil colonisers. We didn’t like to hear about them. They stole our land. The only thing I remember about them is how the people who worked for them complained about the harsh working conditions.

How does the French occupation in Algeria differ to that of what is now Morocco or Tunisia?

France focused more on Algeria because of its strategic location in the Mediterranean region and in North Africa. Algeria has the longest coastline and is in the middle of North Africa. Factors also included our size, resources, the Sahara and our young population.

How has the long war for independence affected Algeria on a long term basis regarding the Algerian we know today? What were and what are the short and long term effects?

There are also some people who are still alive today who were left disabled from the war having lost limbs.

How (in general) are relations nowadays between France and Algeria on a State level and between the two populations? Does France still hold some form of control or power over Algeria and its citizens – socially, politically, culturally or economically?

The French have a lot of companies in Algeria. They still depend on us as a source of economic growth. The largest migrant community in France is Algerian and relations between people are fine. The problem is between governments.

Do you believe that the French government will ever issue an apology or at least even acknowledge what happened? Why/why not? Why hasn’t this happened as of yet?

The French government doesn’t see Algerians as equal to them. They just use us. […] France will never apologise. I know that for a fact. They have never apologised to any of their colonies and they are still messing around with their former African colonies.

One of the presidential candidates for the upcoming elections – Emmanuel Macron – came to Algeria and acknowledged the crimes that had taken place but we know this was a publicity stunt to win votes.

If you had to describe both the colonial period and the war itself in three words, what would they be?

If you ever try and take something by force, expect a more powerful reaction in response.

Is there a key message that you believe underpins this period of history from which lessons can be learnt or warnings can be voiced?

Everyone needs to read about this period – its one of the greatest of all time. Our history has been written by the blood of 1.5 million martyrs. They sacrificed their lives for our freedom.

Do you have a message for either the French government or Voice of Salam readers?

If France wants to build and establish good relations with Algeria, the only way is to acknowledge their mistakes and apologise.

My message for your readers is: get to know history. Reading about history is the only way to understand the present and hope for a better future.

For Algerians, the memories, the stories and the struggles their families faced are all very real whether acknowledged or not. Therefore we must not try and bury the past’s dark secrets but instead acknowledge mistakes and past events, learn lessons and work together to build a peaceful, united future.

Please note: translations are not word-for-word in style (no translation should literally be!) but  in a combined direct/reported “whispering” style format undertaken by a combination of translation and interpreting (editing: Voice of Salam).

Lastly, my best wishes go to the people of Algeria and to those affected by the events discussed. Let the past stand as a lesson and not be repeated. Peace to everyone.

All images are shared/externally sourced unless otherwise stated